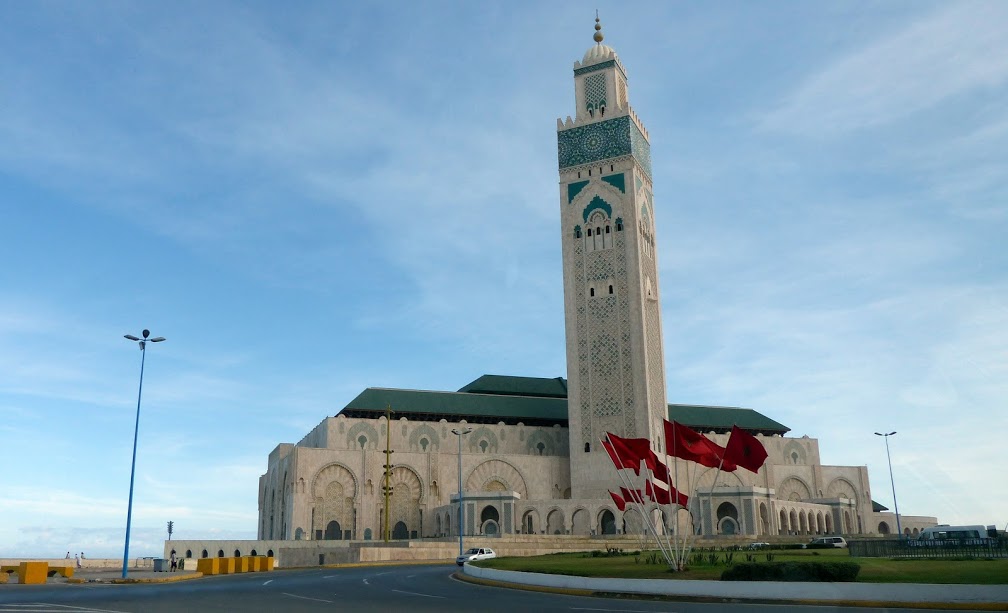 Upon arrival, meet at & pick from Casablanca Mohamed V airport. Transfer to the hotel in the city.

After t breakfast,  check out. Visit Hassan 2 in Casablanca. Transfer to Rabat: The visit of Rabat includes the Hassan Tower, The façades of the royal palace, the Oudaya Kasbah.

Later on, travel to Chefchaouen. We reach the blue pearl of Chefchaouen where we check into the hotel. Free time for lunch and wander in its blue shaded medina, its souk, square…

Breakfast at the hotel and then depart to Meknes city.

Meknes is another Moroccan imperial city like Rabat. It holds the ville nouvelle and the Medina. It was the capital of the Sultan Moulay Ismail during the 17 century, and it was besieged by huge walls for protection. Guided visit of Meknes includes Moulay Ismail mausoleum, the basin Swani, the Jewish cemetery and the old cereal storage rooms. We drive the rest of the itinerary to Fez via the ruins of Volubilis. Check into the hotel.

Fez or Fes is the first Moroccan imperial city. It holds a wealth of attractions and described as the spiritual centre of Morocco. The Karaouiyin University of Fez is considered among the oldest in the world. Hiring a local guide in Fez is essential to have a complete visit. You start the journey with a visit of royal palace main gate and the ceramics with poetry looking at hand made artefacts. You move with your guide to explore the tanneries and the vibrant alleys of the old quarter. You will admire the bustling streets of the Medina where merchants open their shops.

After an active journey we take you back to your hotel.

After breakfast, we depart to Erfoud. On the road we cross several Berber towns: Imouzzèr a small town that gives out to Sais plains, then Ifrane a summer resort town in the Middle Atlas Mountains. We drive to Azrou Cedar forest for monkey pictures and then to Midelt for lunch. In the afternoon, we carry on through the High Atlas Mountains and the valley of Ziz. We pass the Town of Errachidia and driving the rest of the Along the valley of Ziz enjoying the views of palm groves. You reach Merzouga and check into the hotel.

Day6: Around Merzouga and Erg Chebbi

Today’s plan reconciles with Fez Merzouga long drive. Time will be devoted to explore Merzouga and its suburbs. We tour the Sandy dunes of Erg Chebbi that stretches in the Sahara desert on 59 km long and 7 km width. It is a gift from nature!  It inspires locals and guests with it high sandy dunes. We visit a local association for the African music called Gnaoua. The plan includes driving on open spaces and the Serij lake (if the saison is a rainy one). At the afternoon, we change the car with friendly camels to ride on to the middle of the sandy dunes where the tented camp is located. After an hour camel trek, you reach an ocean of sand dunes, Yes, this is Sahara!. You’ll spend the night under equipped tent and have dinner under tents or on open air.

You experience the peaceful area; you go sand boarding and take pictures of a spectacular sunset. Dinner and breakfast are at the camp. After dinner, possibility to listen to local music played by the Guys running the camp. Enjoy music under a blanket of stars!

In order to take lovely pictures, you will be awaken before sunrise (optional). Then have breakfast. We depart to Dades Valley, and stop in Rissani to have a visit of the local Market. We cross Erfoud and we end up in Todgha Gorges for lunch. We devote some time to walk among the cliffs of Todgha gorges and along the Todgha River where we exchange the heat of the Sahara desert with the cool weather of the Atlas Mountains. We keep moving to Boumalne Dades town for an overnight stay.

After breakfast, we drive to Marrakech. On the way we cross the town of roses called El Kelaa Mgouna where the festival of roses is taken place every year. We drive through Ouarzazate to Ait Benhadou Village where we visit the famous Kasbah of Ait Benhadou which is declared a world heritage by the UNESCO and where many movies have been shot, to mention a few the Gladiatot, lawrence of Arabia an so on. After lunch we drive the rest of our way to Marrakech via the tichka Pass(2260m). Arrival in Marrakech in the early evening. Check into the hotel.

Today will be dedicated to explore Marrakech. Historical visit of Marrakech will include Menara garden, a magnificent pool surrounded by flowers and other impressive sights such as the koutoubia Mosque (the twin tower of Giralda in Seville, Spain). The Saadian tombs demonstrate the Moorish architecture with its perfection, The Bahia palace and Madrassa Ibn Youssef. The guide takes you to the restaurant for lunch.

Evening drums will draw you to the Djemaa El Fna (main city square). It’s a festival atmosphere, with snake charmers, Berber and Gnoua musicians, and storytellers illuminated by lamplight and wreathed in smoke. Food stalls on the square sell fresh salads, soups, fried fish and chips, chicken and beef kebabs and even boiled snails or sheep’s head. Finish it off with a glass of sweet cinnamon tea…

After breakfast, we start our 3 hours drive to Essaouira.  The Unesco city has the old quarter, the Saqala, the small harbor and the tasty fish food.  We reach Essaouira and we check in. Later on, we take a guided visit of the medina including a lunch time. Later,  have a free time to walk along the beach and the rest of the time is at leisure. At the evening, we collect you and travel back to Marrakech. Stay at Riad Argan.

At the right time, we pick you up to Casablanca airport for their fly back home.